There is a lot of work happening inside the chapel but, as you may have noticed, the exterior is also getting a lot of attention now. More of the aluminium cladding has been fitted, the ground works are underway and the brick enclosure at the front of the building is well on its way to completion.

In order to provide an adequate place for outdoor bin storage that wouldn’t look unsightly, we chose to build a walled area out from the front-left corner of the building. This space will be large enough to house several large bins, for recycling and general waste, as well as a secure area for bicycles. Access to the enclosure will be through a large solid aluminium gate to the left of the chapel’s main entrance. 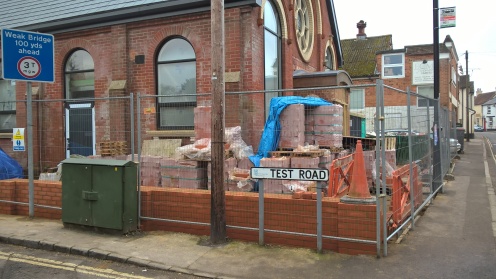 The fascia and soffit boards at the rear of the building have been fitted as well as the capping around the edge of the flat roof section. This has really sharpened up the look of the building by further defining the clean edges that make the overall design really stand out. 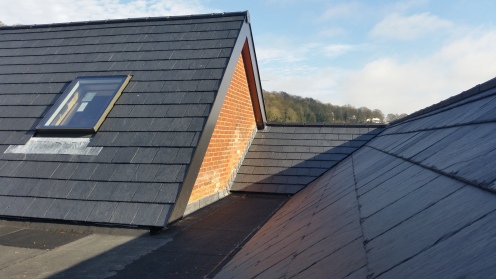 A Game of Catch Up

On the inside there has been a lot of progress with the plastering which has moved along a much faster pace than anticipated. In order to prevent the cracking usually seen in the corners of plastered walls we have opted for a special beading to be installed along the edges of the plasterboard. This beading separates the edges of the plaster from the corners that meet the beams which in turn prevents the hairline cracks that would normally appear.

The process for doing this type of plastering has required three individual teams to work one after the other. The first team install the beading, the second team carry out the plastering and the third team white-washes the walls. However, the plasters have been working extremely fast and have managed to catch up with the beading team and the white-wash team have too managed to catch up with the plasters! So there is a bit of a traffic jam.

So far, the engineering labs, lower offices, kitchenette and workshop have been completed and the teams will soon continue on with the meeting room and offices upstairs.